This Day In History: Lyndon B. Johnson Signs Medicare Law

On this date in 1965, then-President Lyndon B. Johnson signed the Medicare program into law. This health insurance law was implemented for older and retiring US citizens. Prior President Harry Truman was the first beneficiary enrolled in Medicare and was granted the first Medicare card at the same ceremony. Truman was the first President to propose and push for national health insurance. This event took place at the Truman Library in Independence, MO. 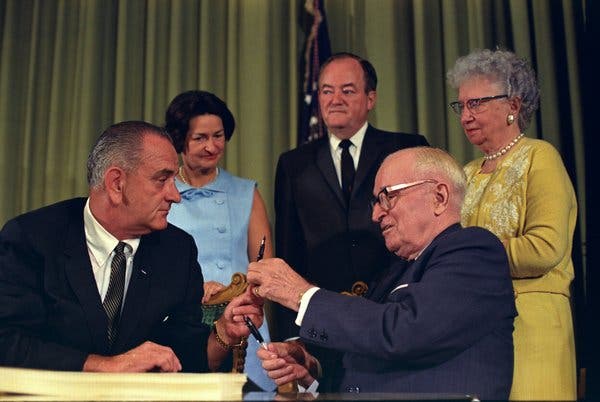 Providing hospital care and medical insurance for US citizens ages 65 or older, the Medicare program acted as an amendment to the Social Security Act of 1935. When it went into effect in 1966, over 19 million people enrolled in the program to help with their medical expenses. This law was later extended to people under 65 who were experiencing disability payment issues or lifelong kidney disease that required dialysis and transplant.

President George W. Bush signed the Medicare Modernization Act into law in Decemeber of 2003. This signature would add outpatient prescription drug benefits to Medicare. President Johnson also signed an amendment to the Social Security Act that same day which offered health coverage to certain low-income people. This was known as Medicaid.