The History of Hygiene

What most people don't understand is that even the most basic hygienic practices are not modern ideas. Tooth brushing, face washing, and even the idea of vaccinations are more ancient than the Bible. 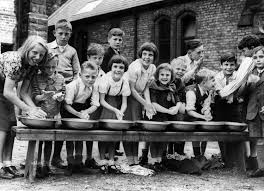 Some of the earliest discoveries of soap were found in clay cylinders stored in ancient Babylon dated back to around 2800 BC. They were fats boiled with ashes. The ashes were supposed to provide a "cleansing" sensation, while the fat aided in removing grime and moisturizing the skin when washed.

Fast forward nearly 1000 years, the ancient Egyptians created a version of soap that combined animal and vegetable oils with alkaline salts to form soapy materials that were used to treating skin diseases, as well as daily washing.

Bathing became an aesthetic choice further along in history, and cleansing one-self wasn't viewed as necessary until the 1600s.

In 1566, King James VI died of sepsis from wearing the same clothes for months on end. He was under the impression that bathing was bad for one's health, but he demonstrated that was, in fact, the opposite of reality.

By 1600, running water, teeth cleaning, and chemical cleansing became popular. By the 1800s, public baths became obsolete, and personal cleansing stations became popular all over the world. Yes, you read that right, it took until the 1800s to reach that point.

By 1861, the flushing toilet, the conventional shower, and traditional sulfite soap became commonplace in the household.