Michigan and Ohio Nearly Went to War Over the "Toledo Strip"

The "Toledo War" began more as an issue with geography and mapping in the 18th century. The Northwest Ordinance delineated the borders of Michigan and Ohio based on a map that depicted Lake Michigan's southernmost tip as being several miles north of where it actually existed. Thus began the unraveling of issues...

Ohio was admitted to the union in 1803 and as part of its constitution, asserted that the land around the Maumee belonged to them regardless of what future maps might suggest. The map discrepancies created a 468-square-mile slice of land referred to as "The Toledo Strip," and both Michigan and Ohio were staking their claim. 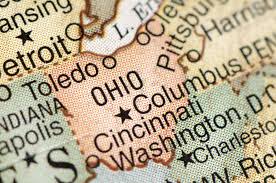 When 23-year-old Stevens T. Mason took over the governorship of the Michigan territory, the dispute heightened. He passed the "Pains and Penalties Act" to fine and jail Ohio officials who tried to exercise jurisdiction over the territory. Ohio Governor Robert Lucas responded with legislature that extended their county borders into the strip. Both Michigan and Ohio also raise militias to guard the strip of land.

Michigan authorities began to enforce their P&P Act by arresting several Ohio state officials. A few days later, Michigan's militia leader led a group of 60 to intercept the Ohio border survey team. The militia fired warning shots and arrested nine members of their party in what is known as the "Battle of Phillips Corners."

A few months later, Michigan Sheriff Joseph Wood was stabbed during a brawl between the two fighting parties. Things seemed as though they would get worse in the coming months. Ohio Governor Lucas had announced his intentions to hold a court session in Toledo to establish his state’s rights to the land, so Michigan Governor Mason gathered 1,200 Wolverine militiamen and marched on the Toledo Strip. His militiamen were prepared to fight in order to prevent the session from happening, but when they arrived, no one was there. The Court session had been secretly held at midnight to avoid a fight. 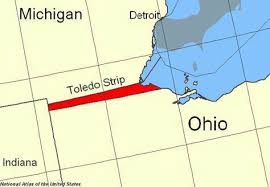 Once tensions died down, President Jackson attempted to settle the land dispute. When Congress was faced with the job of figuring out the final territory lines, much of the debate centered on Michigan's statehood. By December of 1836, Michigan accepted Congress's compromise to relinquish its claims on the territory in exchange for admittance to the union as the 26th state. Toledo and Maumee officially became part of Ohio, and Michigan was compensated with a 9,000 sq mile piece of land on the Upper Peninsula.

The conflict over land boundaries between the two states, however, was not totally resolved until 1915 upon completion of a new government land survey, where the governors of both states shook hands across the border.