A Day in the Life of a Prehistoric British Man

Although early British humans were just visitors to the country (which had obviously not been established yet), neanderthals and early humans returned to Britan because of its cave structure and places to hide. 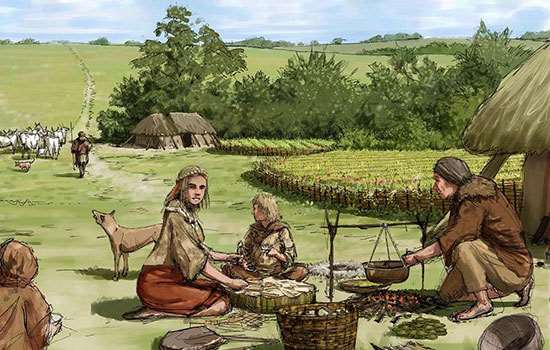 Before there were traditional settlers in prehistoric Britain, the area was home to multiple nomad societies that came and went over long periods of time.

However, these nomads eventually returned and found refuge in the Creswell Crags in Derbyshire as well as the surrounding areas.

When the glacial ice receded roughly 14,000 years ago, hunter-gatherers started to settle in the flat areas around Britain because of the hunting and fishing.

So, since this was before the Bronze age, hunters and gatherers filled their time in these places plucking berries and vegetables and trapping animals to both stay occupied and survive.

So, on an average day, the typical prehistoric British man would wake up next to his straw partner in the morning (straw partners were individuals ((some platonic some not)) that chose to sleep next to one another for warmth, since this was the end of the ice age it was cold pretty much all of the time).

That man would rise with the sun, check for predators, check on the rest of the society, and stoke the morning fire.

Prehistoric individuals also ate breakfast, which was typically protein-heavy to fuel them throughout the day of hunting and gathering.

Believe it or not, societies worked similar to they do now. The prehistoric tribe would split, hunters going to tend to their traps, gatherers going to seek out edibles in spotted areas, and they would reconvene after their work was done.

They would tend to their young, eat, socialize, and return to sleep. The days were very short back then, so there was typically a longer slumber period where these individuals would lay dormant.